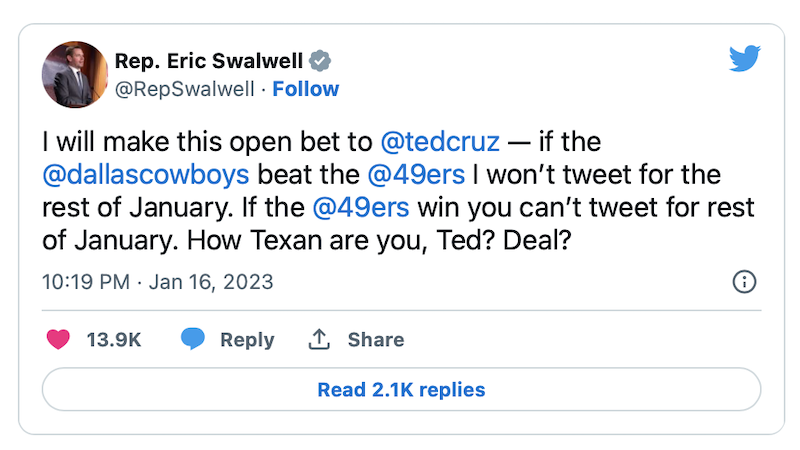 Eric Swalwell, the Democrat most known for his connections to a Chinese spy, continued his illustrious career as Congress’s biggest dork Tuesday by challenging Ted Cruz to a wager on the upcoming 49ers-Cowboys playoff game and immediately received a digital ‘Swirly’ from the Texas senator.

It’s not uncommon for politicians to make friendly wagers backing local sports teams in the communities they represent. What isuncommon, however, is pretending Swalwell is an avid sports nut. This is, after all, a guy who broke both of his thumbs playing soccer.

That said, Swalwell is super-convinced the San Francisco 49ers will take down the Dallas Cowboys in Sunday’s NFC divisional playoff game. The 49ers are favored by 4 points, or in Swalwell’s world – two baskets.

Nothing quite says ‘nerd alert’ like Swalwell challenging Ted Cruz to a football bet by offering up … checks notes … no Tweets for roughly one week.

So stunning. So brave. He really threw down the gauntlet there.

Cruz fired back with his own terms of the wager.

“How about we bet a Chinese dinner instead?” he quipped.

How about we bet a Chinese dinner instead? https://t.co/7sSk1jwiGl

Cruz’s ‘Chinese dinner’ jab is an obvious reference to the controversy involving Eric Swalwell when it was discovered the congressman had ties to a woman by the name of Christine Fang (aka Fang Fang).

A bombshell report in 2020 indicated Fang “took part in fundraising activity for Rep. Swalwell’s 2014 re-election campaign” and interacted with the Congressman “at multiple events over the course of several years.”

Fang had allegedly served as a Chinese Intelligence operative with China’s Ministry of State Security.

There has been speculation that the relationship was sexual, something Swalwell has not specifically denied. Full article here.