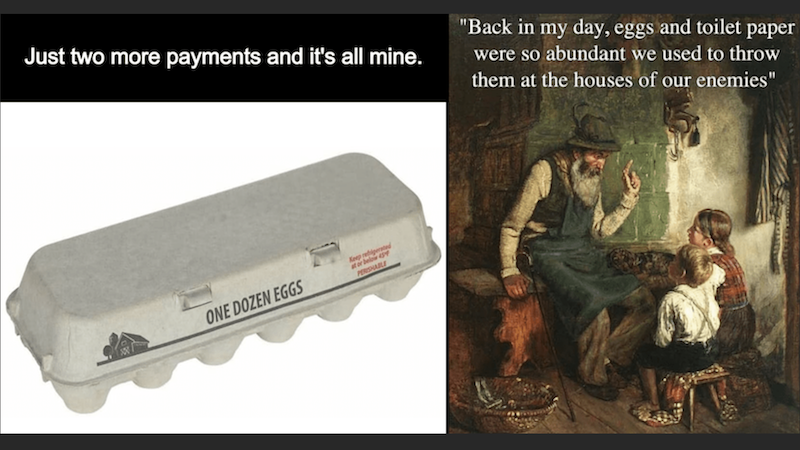 They’re cracking down on contraband breakfasts.

Alongside the usual shipments of drugs and guns confiscated at the US border, customs officers are intercepting a surprising commodity – eggs.

Traffickers are attempting to sneak thousands of Mexican “huevos” across the border per week after skyrocketing prices have made them a hot property, costing up to $8 per dozen in certain parts of America.

Customs and Border Protection (CBP) said they saw an uptick of 108% in egg seizures in the last three months of 2022, according to Border Report and violators end up having to shell out for a fine of up to $10,000.

The San Diego Field Office has recently noticed an increase in the number of eggs intercepted at our ports of entry. As a reminder, uncooked eggs are prohibited entry from Mexico into the U.S. Failure to declare agriculture items can result in penalties of up to $10,000. pic.twitter.com/ukMUvyKDmL

Customs officers have seen many more cases “where the eggs were not declared and then discovered during an inspection,” CBP spokesman Roger Maier told the Post.

“When that happens the eggs are seized and the individual is assessed a $300 civil penalty,” he said, adding the $10,000 charge is only usually applied to repeat offenders or “commercial size imports.”

Outbreaks of bird flu in 2022 resulted in over 57 million US birds dying or being culled, which combined with inflation have seen egg prices more than double. US government figures showed the average price of a dozen large eggs was $1.93 in January 2022 but had risen to $4.25 by December, whereas South of the border 30 eggs can cost as little as $3.

Bringing poultry or raw eggs into the US has been banned since 2012, because it carries a risk of spreading Bird Flu and Virulent Newcastle disease, which can be fatal in birds.